It's my turn again to host the Artbymiran's showcase blog

Each month our showcase designers need to make one project with the showcase theme.
For this month, thats flowers
I've used the verry cute and adorable image Spring Blushes
You can find her in shop HERE 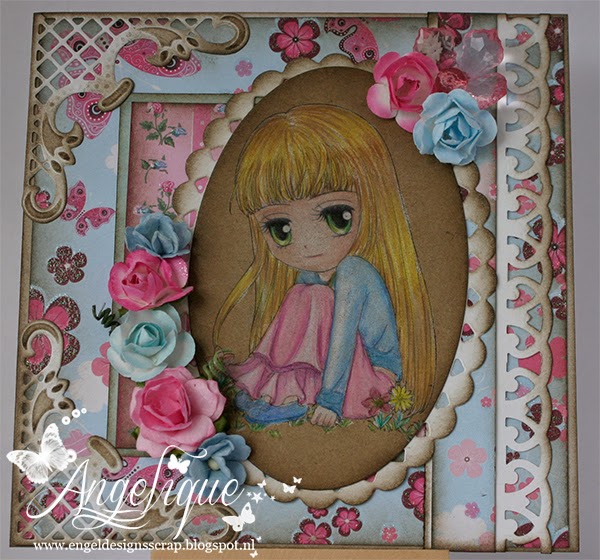 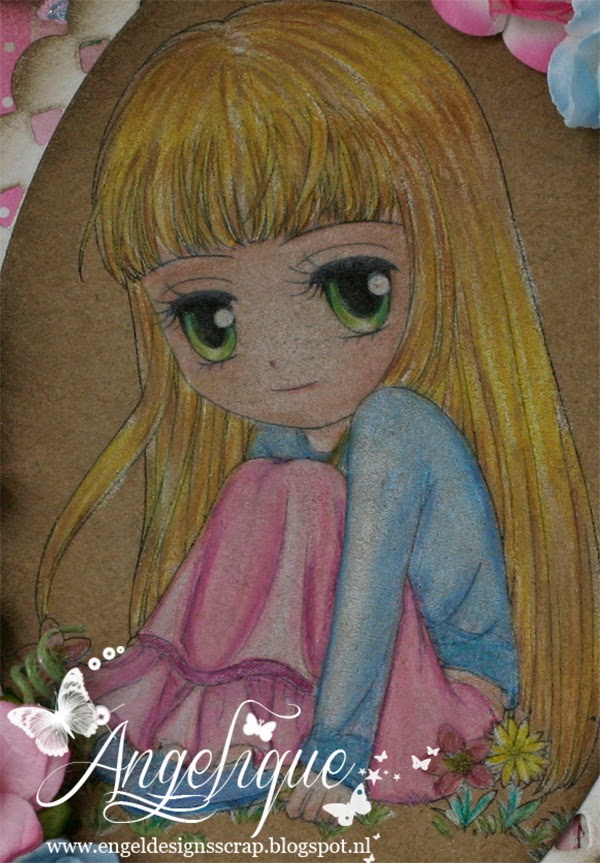 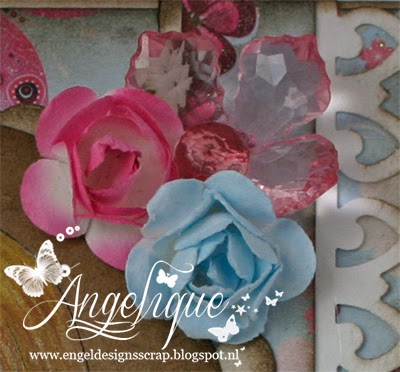 As for the design team, their theme is: Thank You

When I saw the image of Buddy and His Pet Plant, I knew instantly I wanted to make my verry
first page with that image.
So here goes: 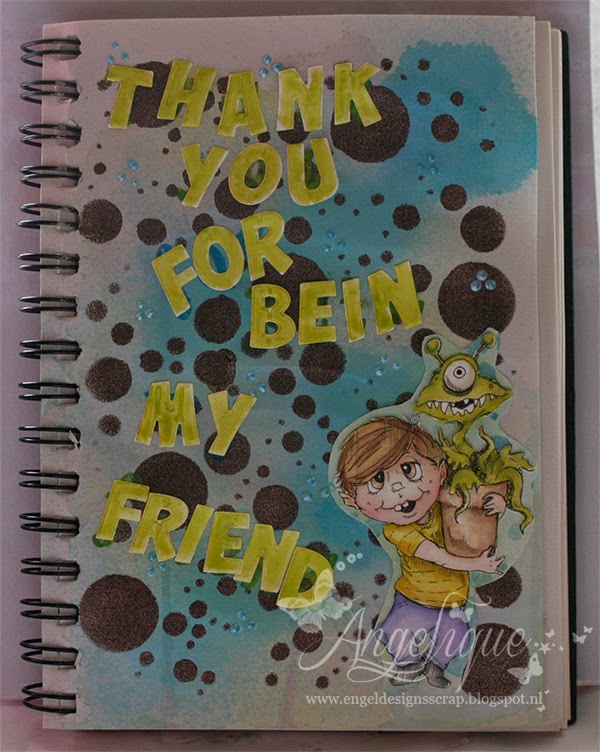 BUDDY AND HIS PET PLANT 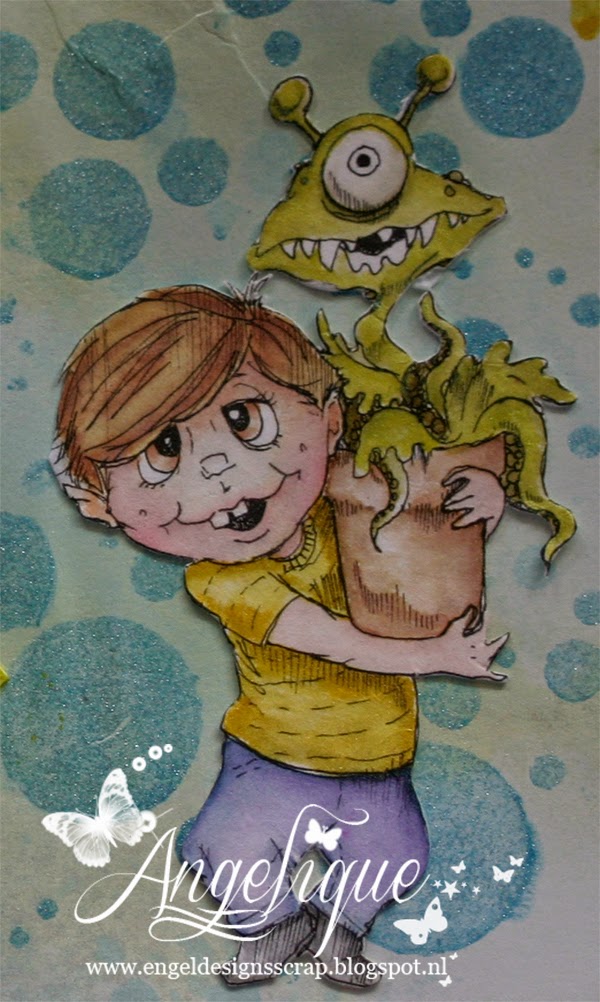 I've used the distress markers/inks to colour the base of the image and then used the twinkling h2o's
to make the colour richer and more vibrant.
I'm happy with how the image turned out.

Did you hear?
Polka Doodles is celebrating her 5th Anniversary and theyre celebrating with a bloghop!
The girls made some gorgeous projects and t
You don't want to miss out as there's a chance to win a verry verry verry generous prize.
Don't believe me?
Drop by the Polka Doodles blog and have a look yourself.

OddballArt Stamps Challenge Blog
Theme: Girly and Glam
Challenge will close on June 14th 10pm EDT
Winner will be drawn by random generator and win 3 OddballArt images of their choice

I've made a tag this time 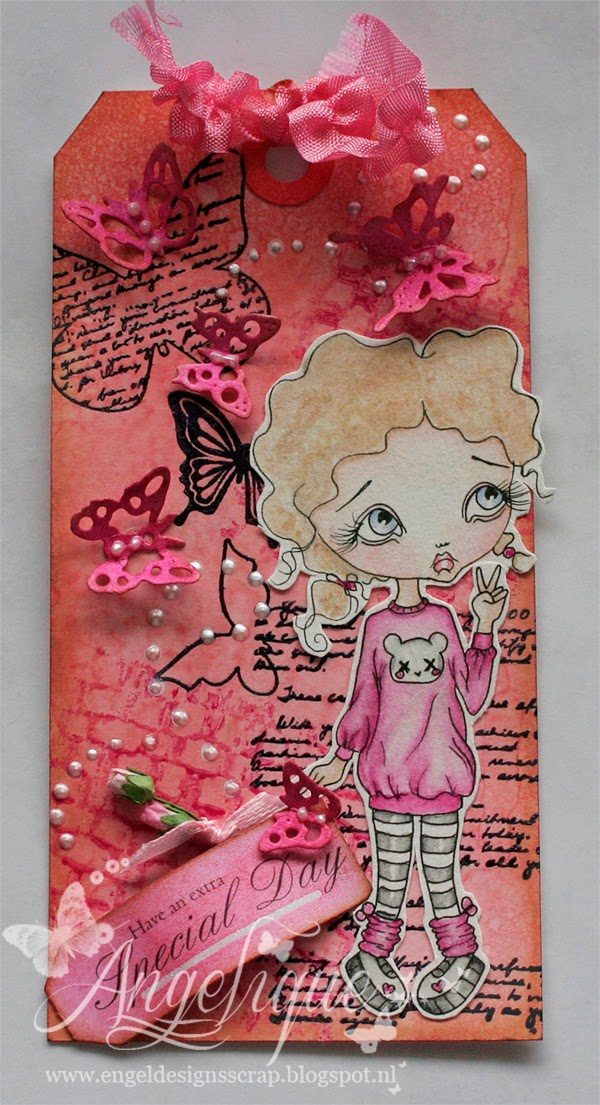 It's showcase day over at MilkCoffee Digi Stamps
Theme: Vintage or Shabby Chic Glamourous Tiffany in her Night Dress 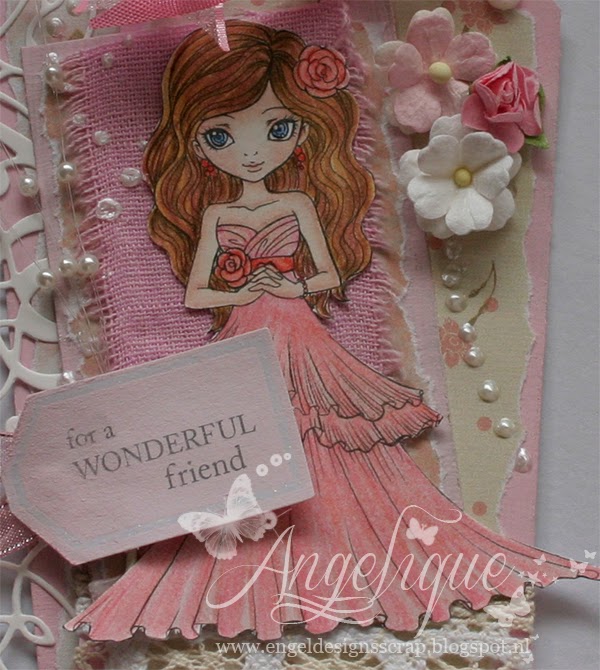 Thank you for dropping by.
Huggsss, Angelique

It's my turn again to host the Artbymiran's showcase blog
Everyday you can see some amazing projects made by my teamies.
So please, dont forget to drop by and leave them some love.

After yesterday's project, back to a card again.
I know many of my cards have pink in them, so I figured it was time to try something else.
Blue! 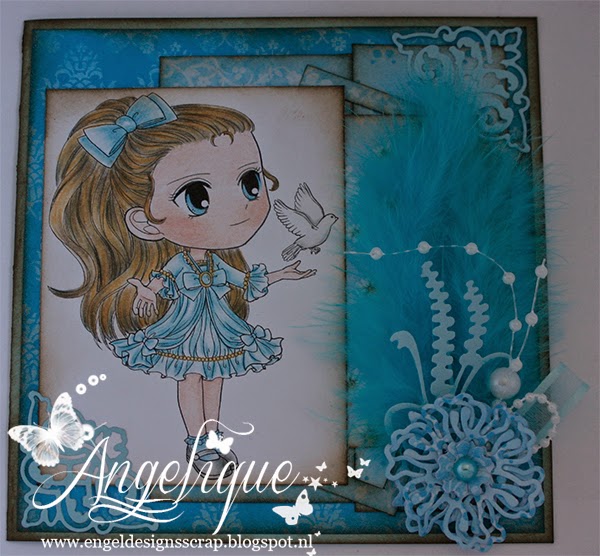 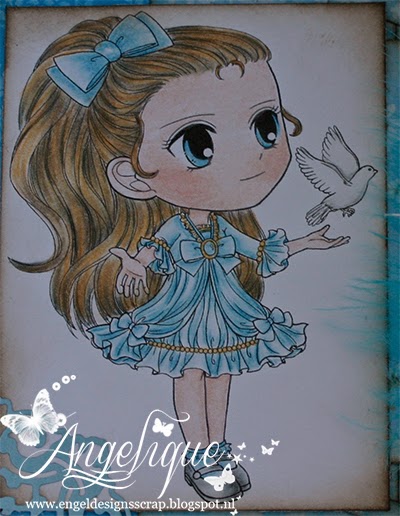 With all the mess I made in my craftroom the last few days, I can't find my notebook where I've written down my used colours.
So sorry :( 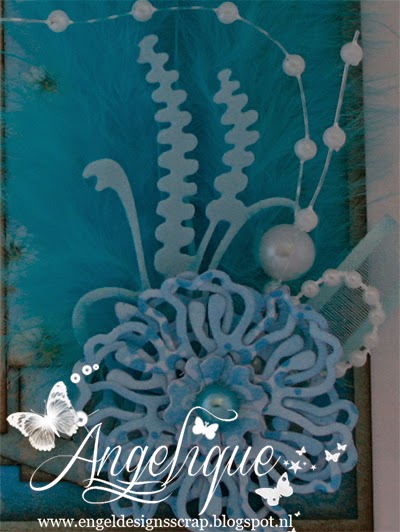 Something entirely different today.
A Steampunk Bottle or something similar to it :P
I wanted to make something special for my mom for mothers day, so here it is. 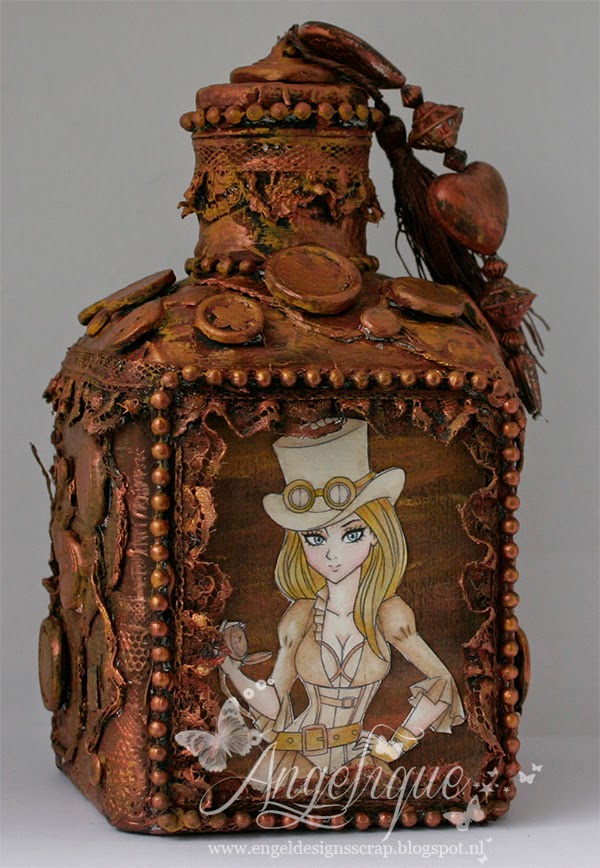 I didn't have any steampunk kinda dies, stamps or embelishments, so had to make do with what I did have. 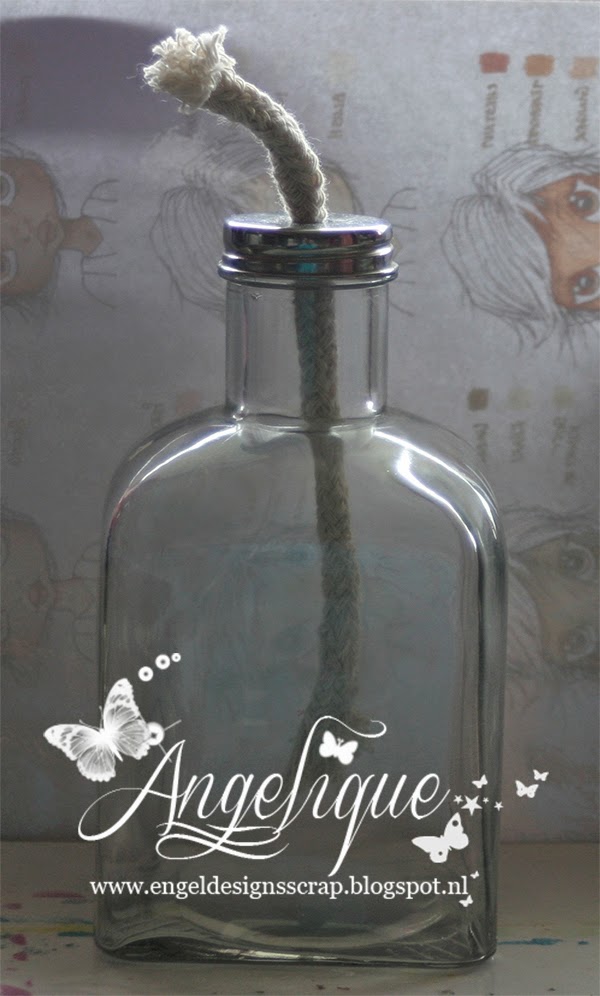 I took the wick out and put it aside, as Ill be using that too.
Screwed the lid off and cleaned out the bottle.
Next step, paper masking tape, the tape used by painters and covered the entire bottle and lid with it 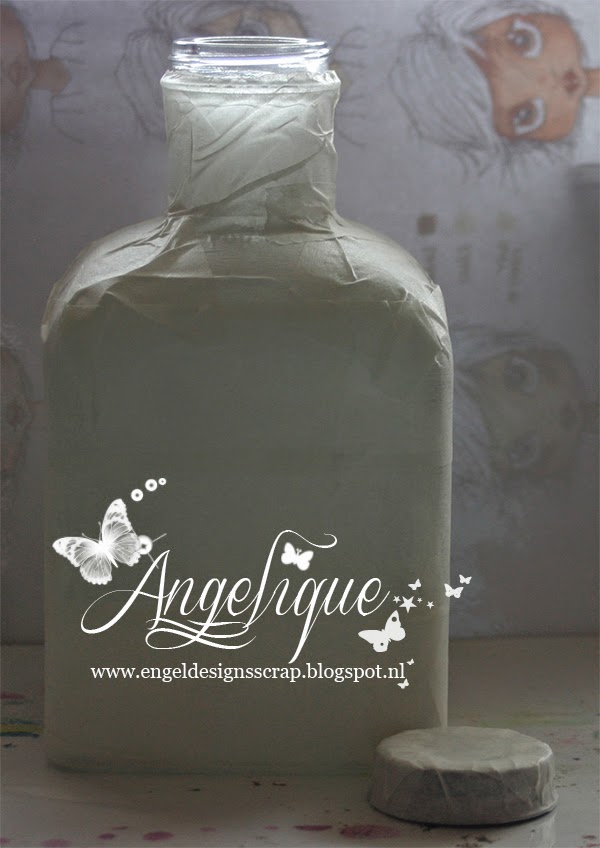 Next step, Gesso
I've covered the bottle and lid with gesso 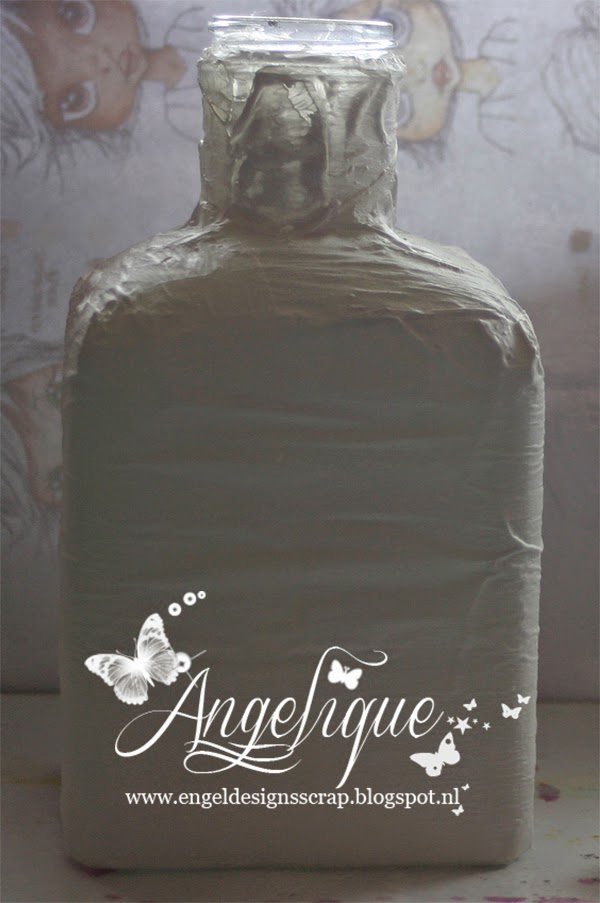 Once that was done, I made sure the gesso was dry by using my heatgun.
With my gluegun I started glue-ing things to the bottle like, lace, beaded string, bratz, buttons.
I made a frame on the front of the bottle where my image was goin to go.
The small flower and circle punch I used to cover up the holes on the buttons and remember that wick I took out.
I took the wick apart and started gluein those strings between the buttons and bratz, you can see it on the left side on the image below.
After I had that all glued to the bottle, I took my gesso again and added gesso to all the embelishments 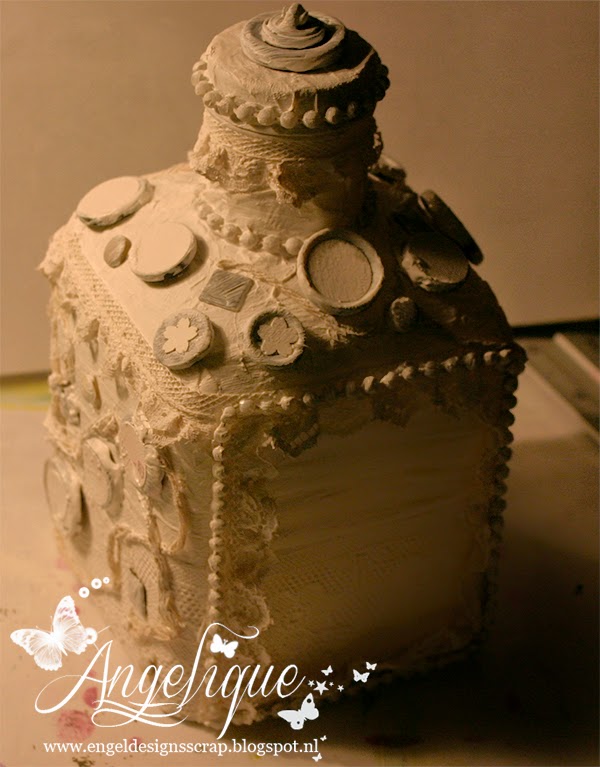 Again I used the heatgun to dry it all and now it was time to start adding paint.
the first layer is done with black acrylic 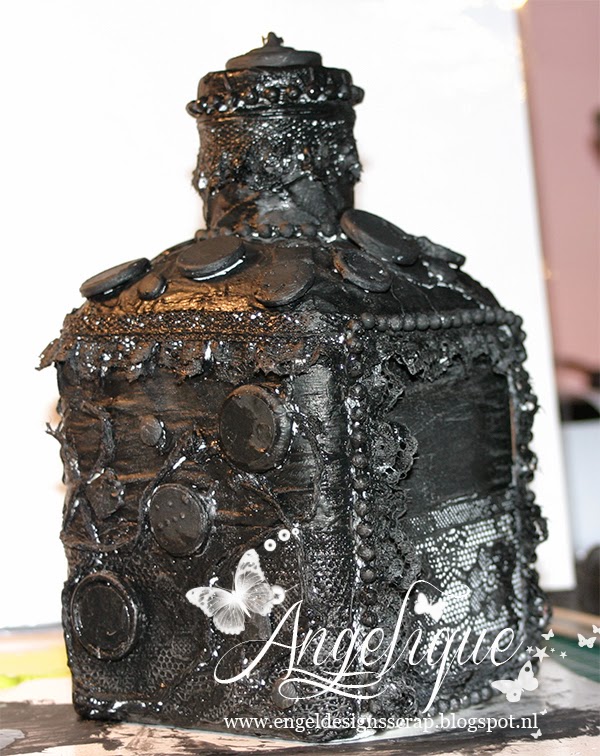 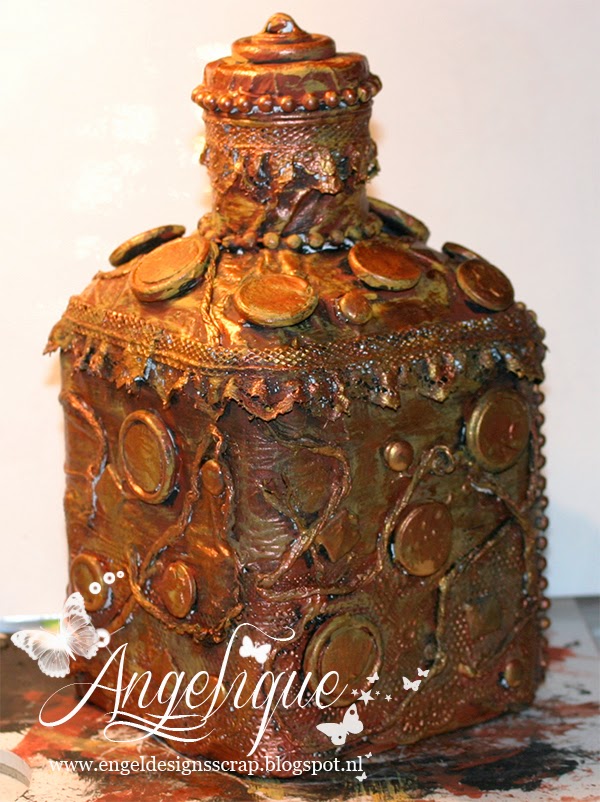 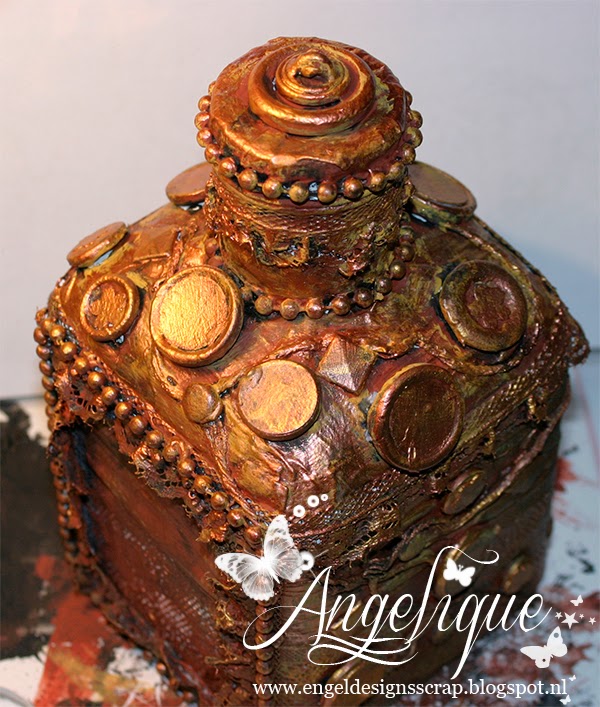 I left it to dry over night.

So this morning it was time for the image.
I measured the frame I made at the front, to make sure I wouldnt print my image to big.
Printed out the image on aquarel paper and took another piece of aquarel paper that would fit within the frame.
On the piece of paper I used the same colours that I had used on the bottle, to create the background.
I put it aside to dry and took the image.

I've cut the image out and glued her on the piece of background paper and then placed it within the frame on the bottle.

Finaly, I added a tassel, also coloured with the same paints I used for the bottle and the other embelishment you see attached to the lid comes from christmas tree decoration, which I also painted. 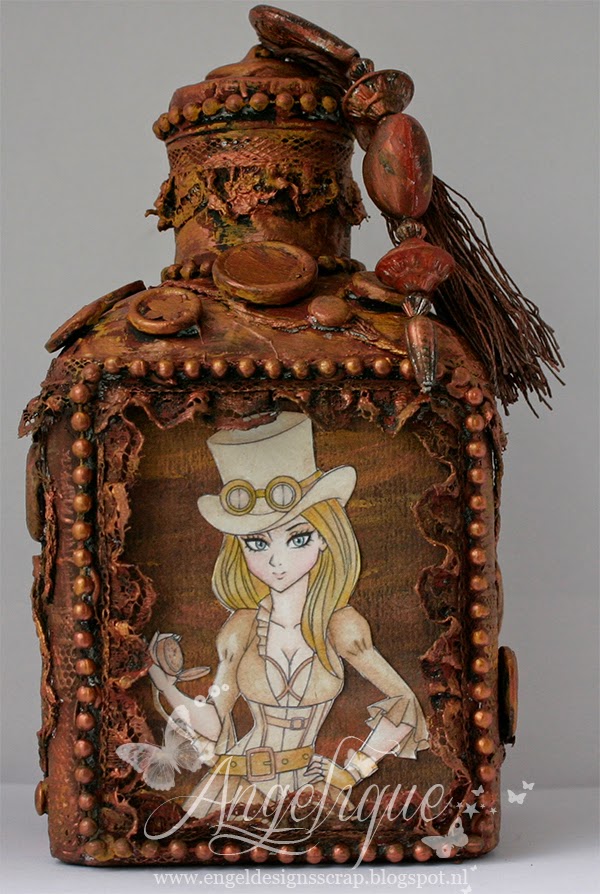 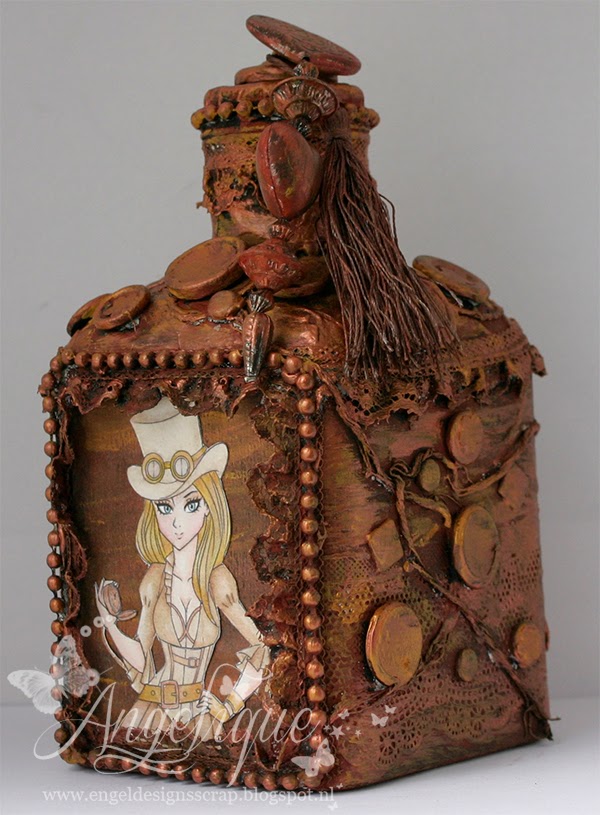 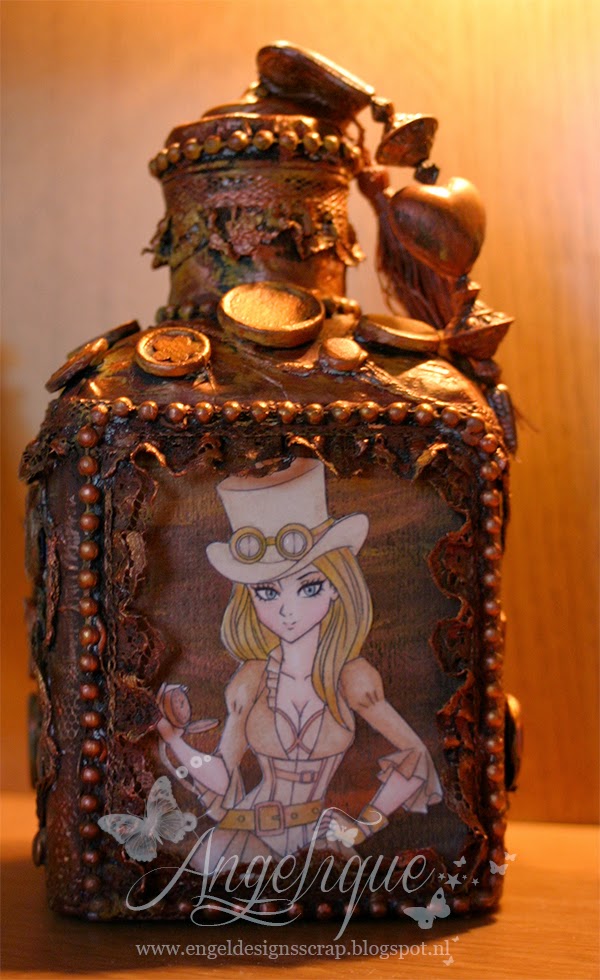 My colouring skills arent so good, but I'm well happy with how this project turned out.

Blogger is bein a bit of a pain in da ... today
It will not let me join/follow blogs, will try again tomorrow 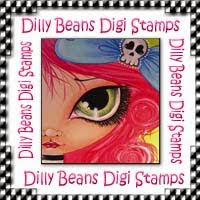 http://www.sillydillybeans.blogspot.nl/
As for the design team, their theme is: Embossing Heat or Dry 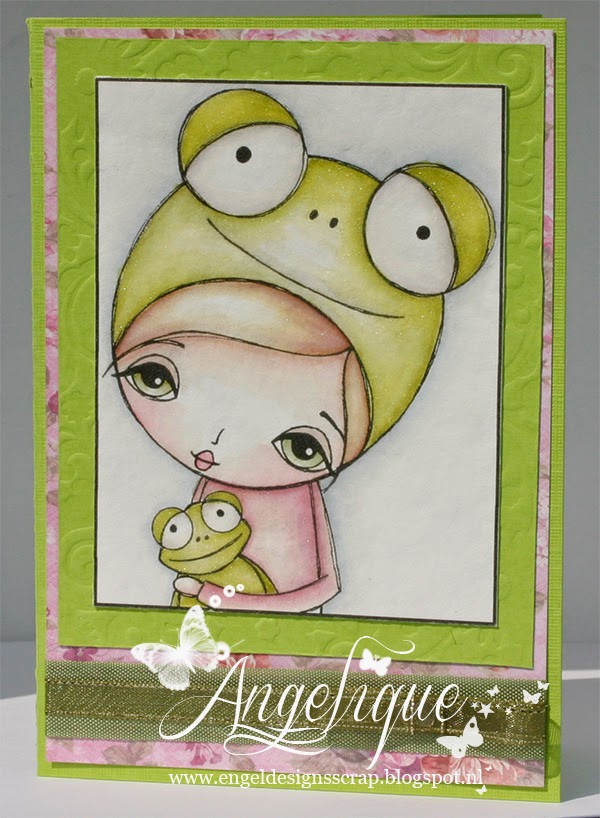 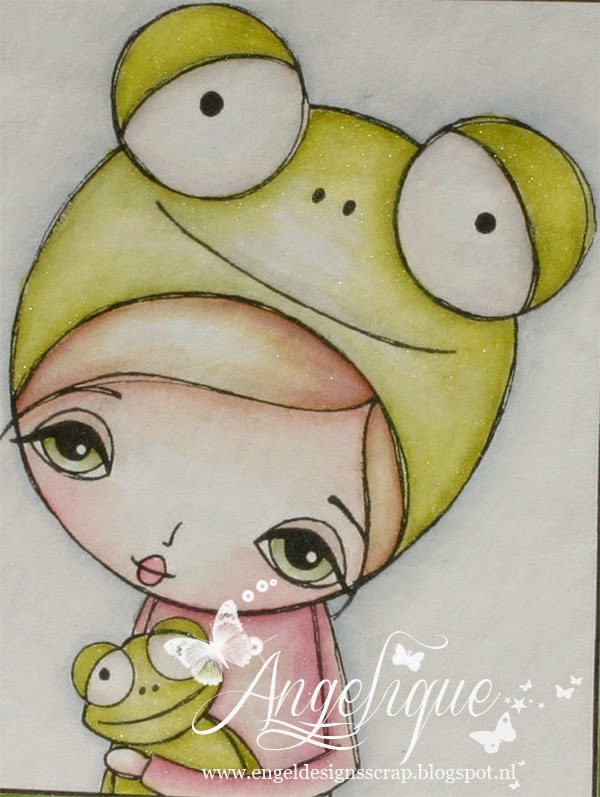 It's already time for the second Oddball Art Facebook Challenge.
Theme as always, Anything Goes with an Oddball Art Image 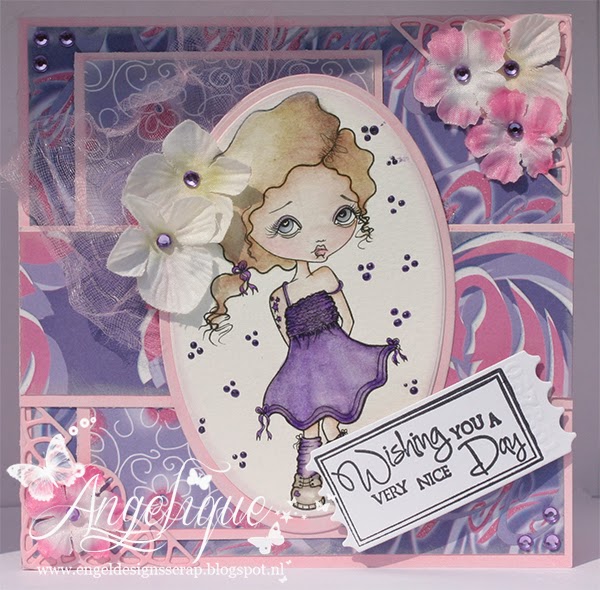 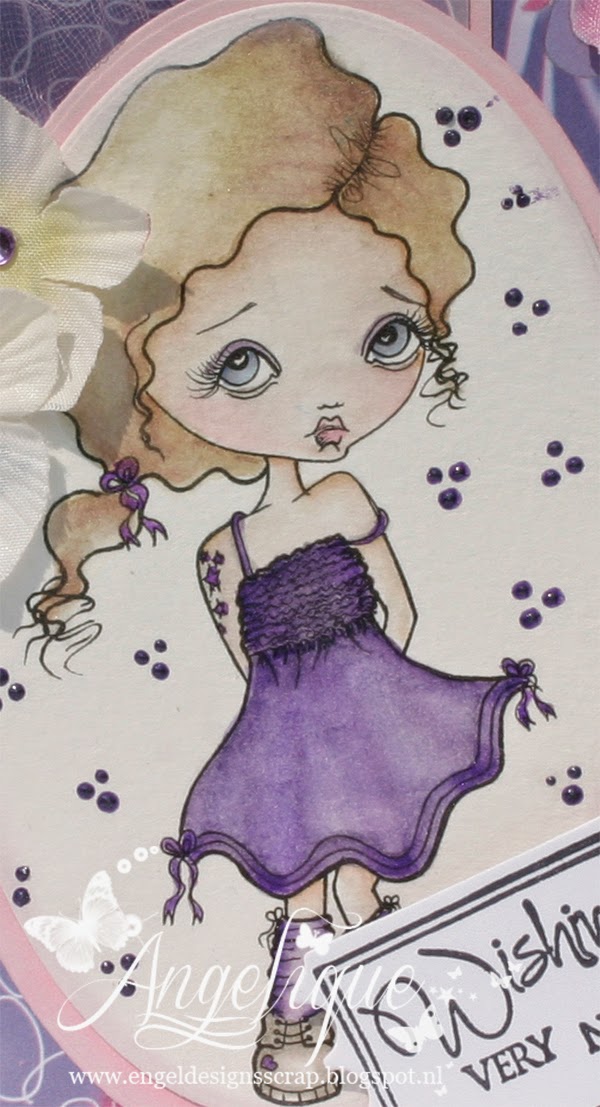 I've used Fairy Tiffany. I love fairies and she's just gorgeous.
The sketch that I've used is the Through The Purple Haze sketch for this weeks challenge 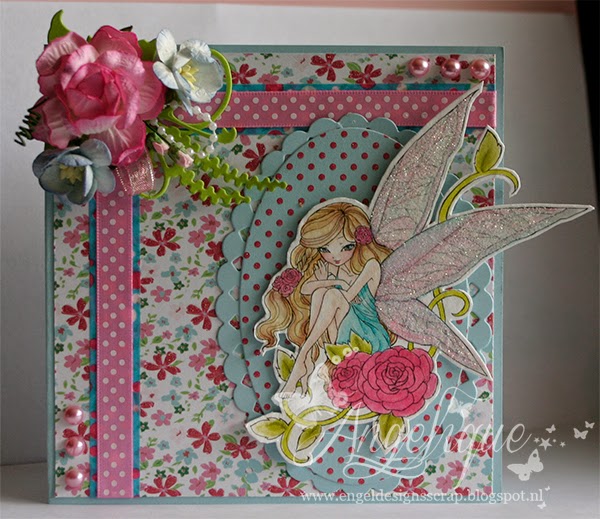 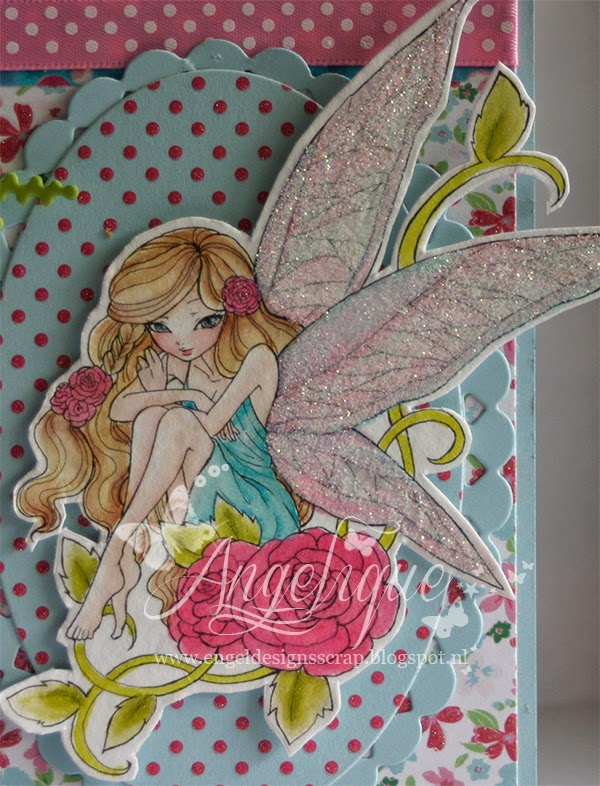 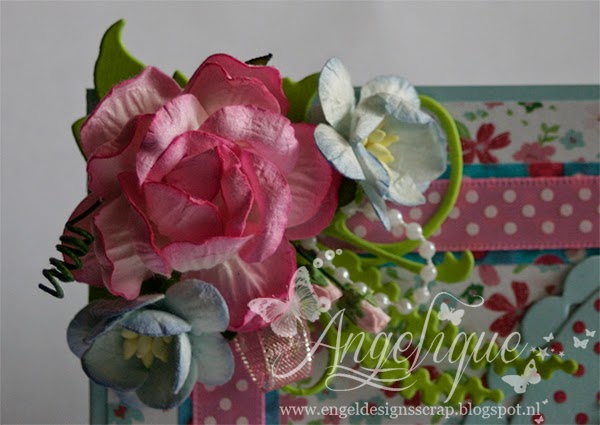 Thank you for dropping by.
Huggsss, Angelique